The Fabric of Invasion and Conquest

Recent discoveries made possible by advanced technology, like DNA studies and isotope analysis of textile fragments from Viking ship burials have brought to light the importance of cloth in the extensive conquests by the Vikings. In August, 2019 I visited two Viking ship museums in Norway and Denmark. I learned about the seafaring Vikings and was able to photograph some fascinating displays. 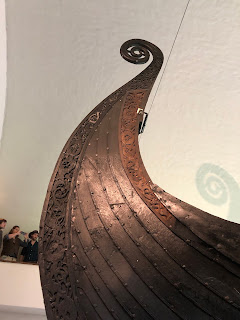 Centuries before Scandinavian farmers left their homeland to conquer and plunder throughout Europe, Central Asia and North America there was famine in Sweden, Denmark and Norway. It was theorized that this was caused by a series of volcanic eruptions that produced a great deal of ash in the atmosphere. This resulted in extreme cold (the little ice age) and famine. Desperate to survive, Vikings left Scandinavia by long wooden ships powered by a revolutionary discovery—the sail. It was the development of the cloth sail that made their voyages across oceans possible. Between about 700 to1100AD Viking warriors invaded and conquered lands far afield from their native land.

Viking women wove the square woolen sails for the ships. 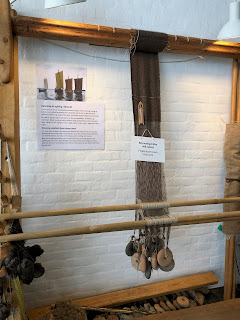 The fiber came from Northern European short tailed tough little sheep. They had double coats, an outer coat of long strong hairs and a soft inner coat. Weavers used the course long fibers for the warp and the softer inner coat for the weft.  It took the wool from about 700 to 1000 sheep to make a single war ship sail. 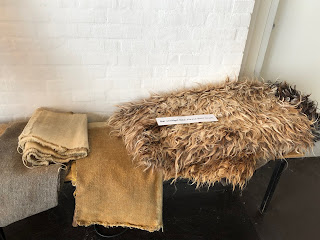 The sails were a variation of the basic woolen cloth that was used for clothing and other domestic purposes. 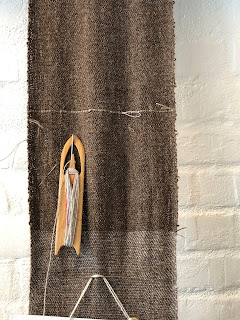 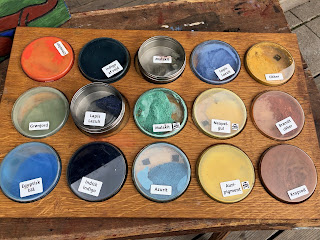 The woven cloth was “fulled” or felted and then coated with a resin, which helped make the sail sturdy, wind and waterproof. Thus, the sleek ship was powerful, feared and beautiful.

Posted by Barbara James at 3:05 PM

Great timing on this article! I have just got back from a trip to Scandinavia and the UK. Thank you for posting this.

We are a group of professional artists who create and exhibit art cloth in galleries and other art venues.

WHAT IS ART CLOTH?

It is cloth transformed by adding or subtracting color, line, shape, texture, value, or fiber to create a compelling surface.

WE INVITE YOU
to read our blog, watch our process, and join our conversation as we create and discuss art cloth. We hope you'll leave comments so we know you've been here!